The History of the Inn 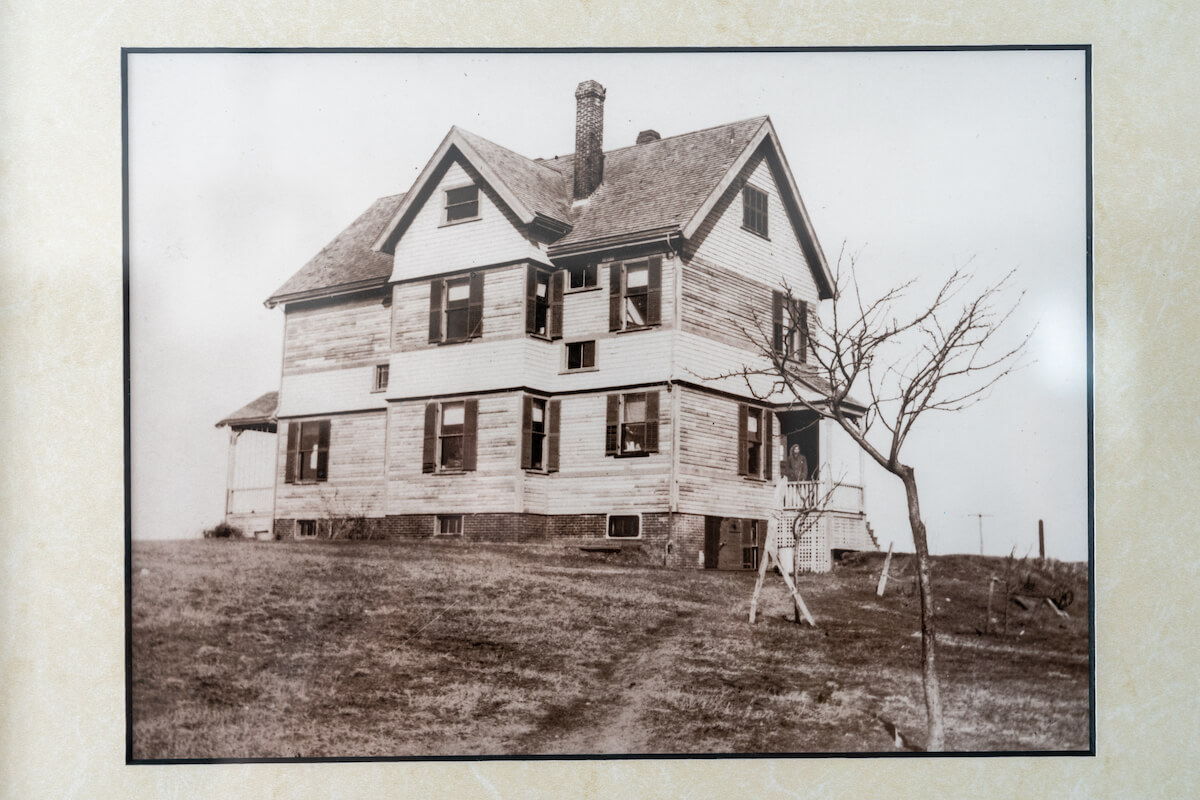 In 1893, Sarah Chipman (1836 – 1906), the wife of the late Captain Barnabas Chipman, had the magnificent Queen Anne Victorian built on land obtained from her brother, James Hatch. She called it The Overlook because she was able to see both the Atlantic Ocean and Cape Cod Bay from the house, as well as views of Minister Pond. Now the views are blocked by the National Seashore Visitor Center and mature trees on all sides of the house. The address has been known as 3085 Old Kings Hwy and 3085 State Hwy, Eastham, MA. However, the entire history begins with a sea captain from Wellfleet.

Captain Barnabas Higgins Chipman was born in Wellfleet, MA in 1828, a son of Ebenezer Chipman and Martha A. Higgins (both buried in Wellfleet’s Duck Creek Cemetery). He was orphaned at 7 and went to live with local relatives. By age 18, Barnabas began his career as a sea captain and merchant. He ran a ship chandler’s shop and was also the well-known captain of a two-masted schooner named J.V. Wellington, which carried cargoes of coal and lumber up and down the East Coast. In 1852 he married Sarah Mayo Hatch of Eastham. Sarah’s parents were Freeman Doane Hatch and Abigail Mayo of Eastham. Sarah also had 3 brothers: Nathan, James and Freeman.  Freeman Hatch (1820-1889) was Captain of the famous Clipper Ship “Northern Light” which in 1852 set a world record for sailing San Francisco to Boston in 76 days 6 hours.

In 1869 Captain Chipman moved his family to Eastham and built a house on Locust Road called “The Walton”, using wood shipped aboard the Wellington from Wellfleet. An 18th century barn was moved as well. It was around this time that the first cranberry groves in Eastham were farmed by Captain Chipman on a nearby property on Great Pond. It was called Betsy’s Point. Barnabas died of consumption in 1874 and is buried at Eastham’s Evergreen Cemetery. Also in 1874, Sarah lost both of her parents; most likely from consumption (pulmonary tuberculosis) as it was a highly contagious disease at the time with no drug treatments available. The Walton remains standing to this day on Locust Road in Historic Eastham.

In 1879 the first transatlantic telegraph cable was laid between Brest, France and Eastham, Massachusetts. (The French Cable Station Museum is in Orleans, MA and is open to visitors in the summer months. Free guided tours are available of the historic collection of original Atlantic undersea telegraphic cables, instruments, maps, and assorted memorabilia). John Smart of Bristol England was hired on January 1, 1880, by the French Cable Company for a three-year contract as one of the first operators of a telegraph station built in North Eastham near where the “Three Sisters Lighthouses” stood.  His boat, the Samara, landed at North Eastham on January 19, 1880. Around 1884 John Smart accepted a position as a telegraph operator in Brooklyn, New York, and married Abbie Chipman on December 21, 1886, in Orleans, MA.

John and Abbie had two daughters, both born in Brooklyn, New York. Christiana (also called Christine) was born in November 1887, and then Matilda (Tilly) was born in January 1889. They raised their family in Brooklyn and moved back to Eastham around 1906, the year that Sarah Chipman passed. In 1909 Christiana Smart married Chester Harvey Smith in Providence, RI. Charlie worked as a bookkeeper in a car works. They settled in Sagamore, MA (now known as Sandwich, MA).  They had one daughter, Margaret, who married Howard D. Johnson of the famed Howard Johnson’s restaurants!

In 1891 Sarah Chipman married again, to Eastham native Israel C. Mayo, a tinsmith in Gloucester. In 1893 Sarah Hatch Chipman Mayo bought a tract of land from her brother James S. Hatch and built the Overlook, a magnificent Queen Anne Victorian, where one could see ocean and bay views from the windows. By 1895 Cape newspapers began reporting the arrival or presence of guests at the Overlook.  There are several reports that by 1900 Sarah and Israel were no longer living together and that he had married a third wife even though Sarah was still living. Sarah’s second husband died in 1904. She lived at the Overlook until her passing in 1906. Sarah is buried in the Evergreen Cemetery in Eastham, MA. 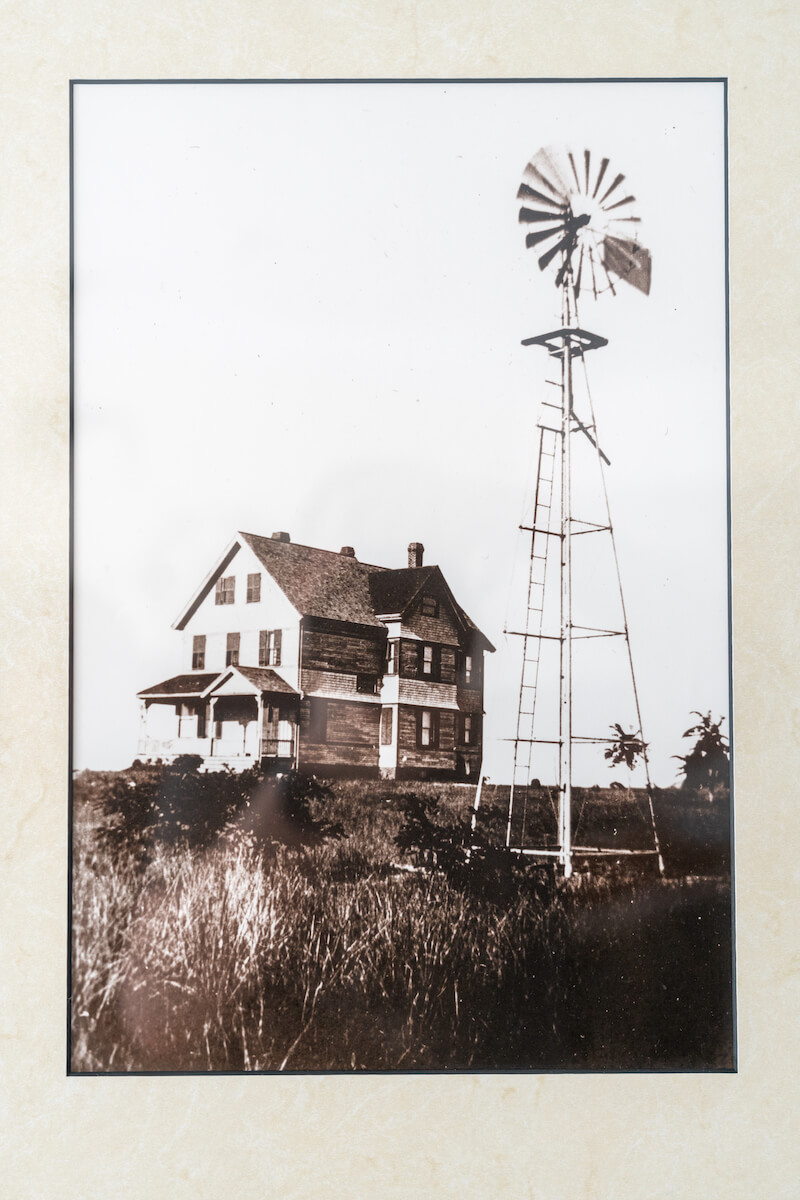 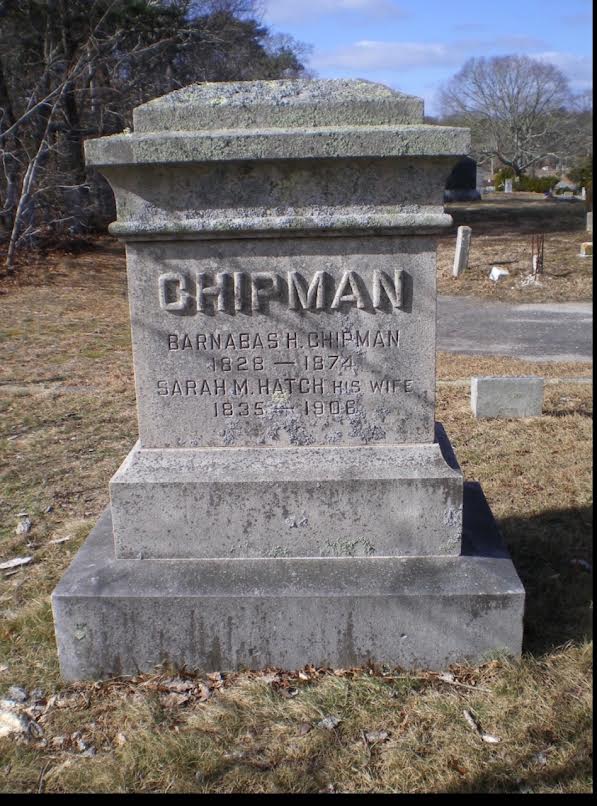 Sarah left The Overlook to her son, Arthur, and The Walton to her daughter, Abigail. In 1908 the siblings switched property deeds, so Abigail became the new owner of The Overlook. Also, in 1908, the barn that was part of The Walton property was moved to The Overlook and is, today, The Carriage House, used as part of the lodging facilities. John Smart also built a new windmill in 1908.  In 1912, oak trees were planted on the property with acorns brought from England via Africa, and the concrete entrance posts were poured. The Smart’s were prodigious farmers raising both cattle and chickens as well as managing both corn and flower fields. The felled trees contributed to an enormous stockpile of wood for the house’s fireplaces.

In 1922 Abbie F. Smart sold 3085 State Highway, identified in the deed as Overlook, to Winthrop Dolby of Winthrop, MA, who sold it two years later (1924) to Thomas and Mary Chase Kelley.

In 1929, Thomas and Mary Kelly opened the house as a lodging and tourist home named “The Overlook Lodge.” During this time the writer/naturalist Henry Beston, author of “The Outermost House” was a loyal guest and mentions his frequent stays in his book. During the Great Depression, many young residents of the area were employed there. The Kelley’s ran The Overlook as an inn until at least October 1936. In 1931 and 1932 the Kelley’s advertised the inn in the Springfield Republican as open all year offering “good home cooking”; a room then cost $5 a day or $25 a week.  In August 1937 Bass River Savings Bank foreclosed on the Kelley’s 1929 mortgage. About a year later the bank sold the property to Harold T. and Dorothy E. Hall of Hingham (coincidentally where Henry Beston and his family lived part of the year), who deeded it about two months later to Hall’s mother, Mary E. Hall of Hyannis, who sold it in August 1944 to Harry E. and Bessie M. Walters of Woodside, New York. Harry died unexpectedly in November 1946, and Bessie ran the guest house with the help of her son Alfred Mills. In 1952, the Mayor and Mayoress of East Ham, England were honored guests of the Inn as Eastham marked its 300th year founding anniversary. Mayor Walter E. Humford also joined the festivities.  In 1978 Bessie Walters sold the property to Karl James Splan and his wife Janet, who in turn sold it five years later in 1983 to Ian and Nan Aitchison.

The Overlook’s original homestead was reduced in the sale to a mere one- and one-half acres of land. The Aitchison’s spent the next 2 years doing extensive renovations which included restoring the original wood floors. The name was changed to The Overlook Inn to highlight that it was now a fine country Inn and reopened to the public in 1985. In 1988 a large addition, designed by architect Alan Dodge, was added to the back of the house, which added 4 large guestrooms, a new dining room, fireplaced living room, and billiard room (now the library).  In 1995, the old barn was renovated to create 3 family suites – now called The Carriage House.

The Aitchison’s sold the property in October 2001 to Pam and Don Andersen and the name was changed to The Inn at the Oaks. The entire property was now surrounded by mature oak, fir, walnut, and elm trees – some originally planted in 1912. The Andersen’s continued to run the very popular Inn for 9 years.

The property changed hands once again when it was sold in 2013 to acclaimed child psychologist Dr. Lawrence Shapiro; the first owner who hired professional innkeeping staff to run the business. The property was sold to current innkeepers Melody and Paul Edson in June 2019 and has once again become a family owned and run Inn. 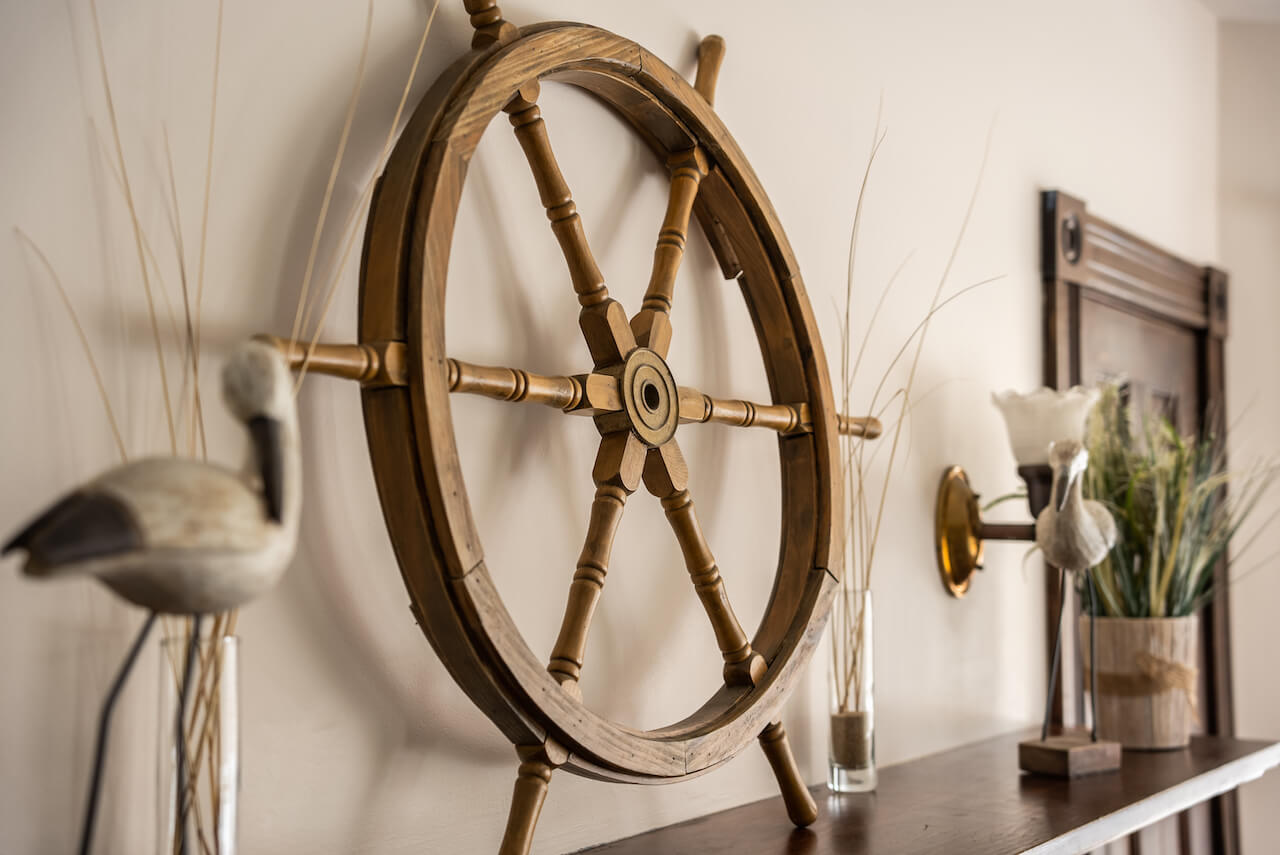 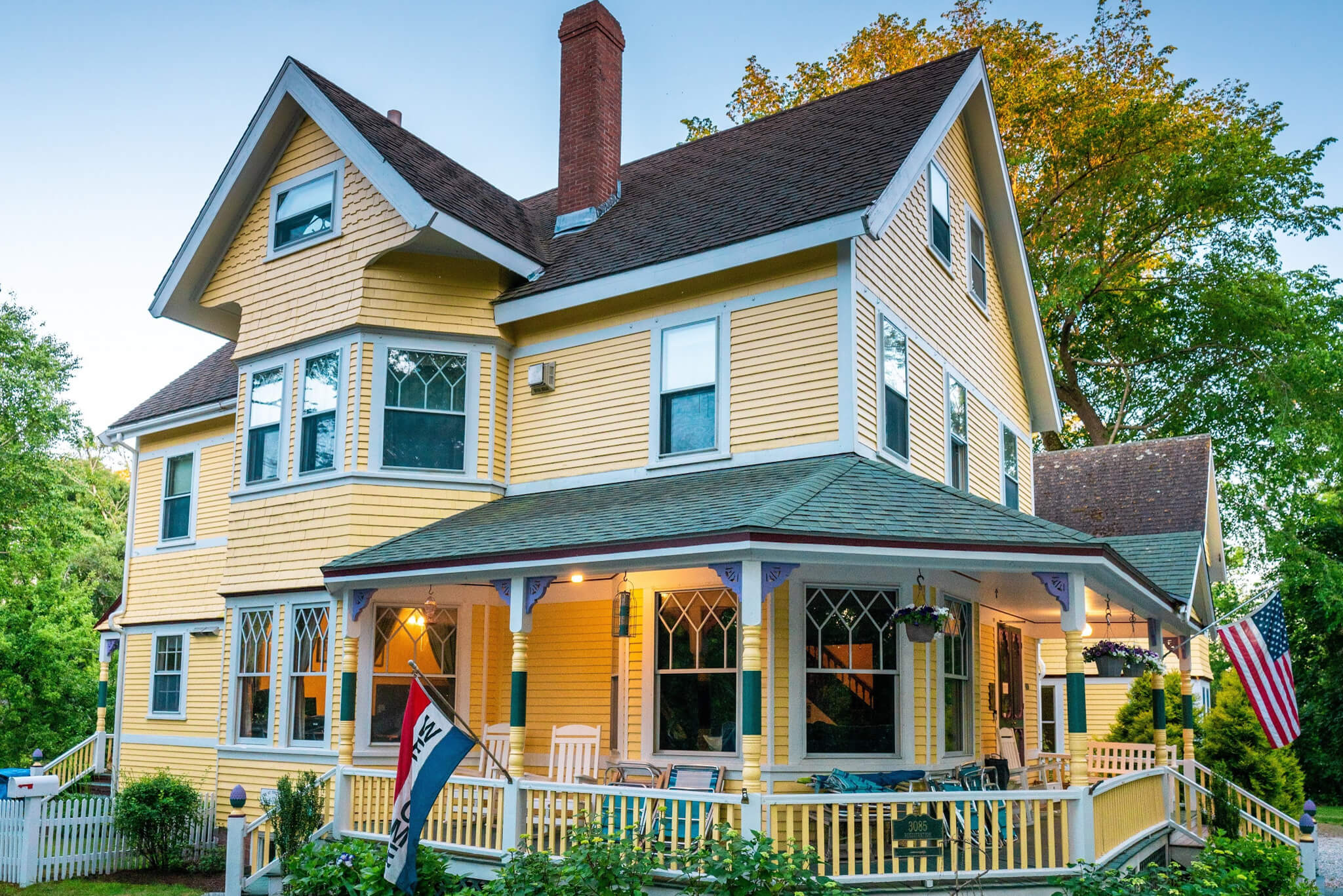 The original Inn is now 129 years old. The Inn at the Oaks is unique as it is the only Queen Ann Victorian built in the area. The original building is three and a half stories high, distinguished by the three tall, clustered brick chimneys, the multiple high-peaked roof lines, the two-story bay windows, the brick foundations, and the wrap around covered porches.  The house is lit by 46 original, wide pane, hand-cut glass windows which allows generous interior lighting. The house rests on a full brick basement. It is supported by great wood beams held aloft by brick columns. Painted clapboard siding interrupted by a section of shingling reaches to two stories. Decorative diapered shingling adorns the third floor just beneath the deep eaves of the shingled roof. The main body is interrupted by plain vertical and horizontal trim members. The canopies of the two verandas are held aloft by turned wood columns capped with scribed brackets. The four fireplaces, each with a different design, are all original. The beautiful mahogany staircase is original and there are pocket doors throughout the inn. The wrap-around porches, second floor outside deck, outside fire pit and beautiful gardens provide many welcoming and comfortable locations to relax and enjoy an early morning or afternoon beverage.

The Inn at the Oaks is part of Eastham’s historical district. It remains the oldest continuously running lodging establishment in Eastham. 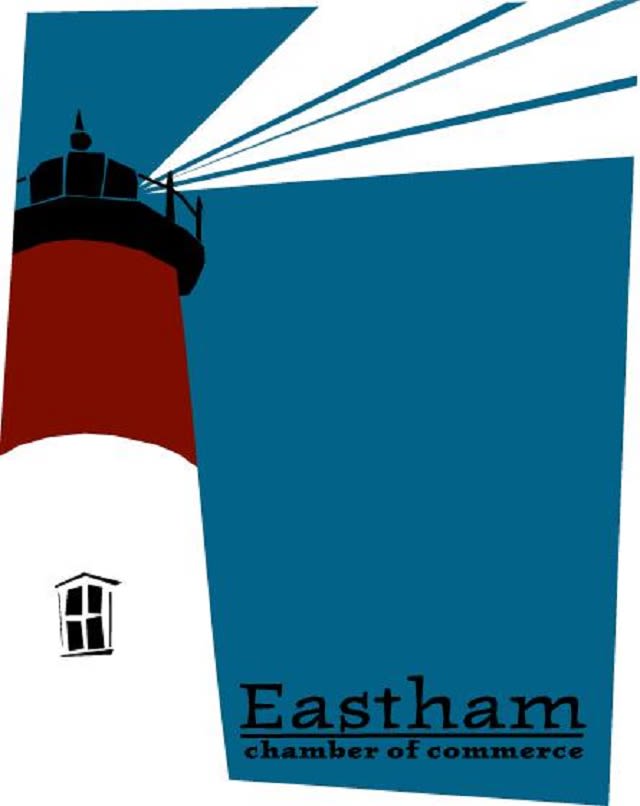 Inn at the Oaks in Eastham, Massachusetts.  All Rights Reserved 2022©
Website made with ♥️ by Outstand Online

Inn at the Oaks will be closed for a short winter break beginning December 12, 2022 and will reopen on February 12, 2023. We wish all our friends, family and guests a wonderful holiday season, and a healthy and Happy New Year!